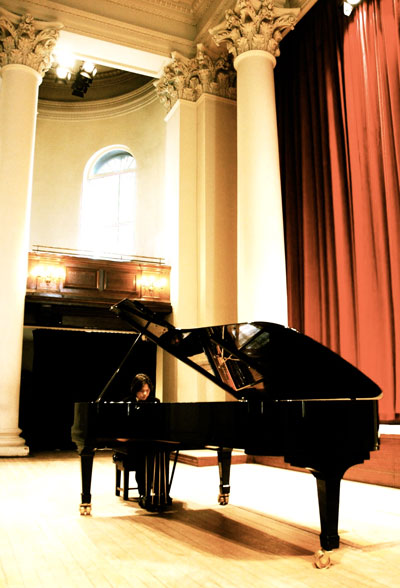 "A most brilliant and sensitive musical talent both as pianist and composer "
GUARDIAN  "There was a moment near the beginning when one assumed the player was using amplification, he brought forth such a level of volume from his instrument but it was simply technique and turned out to be a logical step towards the next section. In the middle there was a simple diatonic piece, a quasi-alberti bass surmounted by a simple melody of great charm. The work was called "Scenes from a Native Land" which explained the transition from section to section. It was inspired by Hirai's concern with the state of the world and humanity. He is deeply conscious of the disasters, man-made and natural, that have befallen the world over time. This work was well received by the audience. "
MUSICAL OPINION ""The second half opened with works by Motoki Hirai himself, all US Premières. Valse Pathétique was my favorite of them, a musical expression of his emotions after a friend's death. Through a melody full of longing and the absence of the left hand during the waltz's third beats, Mr. Hirai conveyed poignantly his sense of loss."
New York Concert Review " . . . a group of original compositions by the pianist himself, in which the expressive character of his Valse pathétique and Three Recollections made his sympathy manifest, so beautifully is his music laid out for the keyboard, as is his earlier Hommage à Chopin a finely subtle composition"
MUSICAL OPINION "Hommage à Chopin, written when the pianist was a teenager and possessing at times as much kinship with Liszt as with Chopin. The desire to make the piano sing was clearly showing itself early in Mr. Hirai's life, and his playing reflects that quality first and foremost."
New York Concert Review